Safety standards in the context of robotisation using AMRs

The main and most important danger posed by AMRs is also their greatest advantage – their mobility. Looking at them, as they slowly glide through warehouses and production halls, brings to mind slow yet hardworking turtles. Nothing could be further from the truth. An AMR could easily move ten times faster. So why doesn’t it? Because low speed is an essential requirement for ensuring the safety of people and other machines working in its vicinity.

We have become used to the sight of robots performing sequences of complex movements almost instantaneously. Powerful robotic arms mount, assemble, and machine with micron precision. You can admire them from a safe distance from behind armoured glass, or through the steel wire of a safety cage. Operation stops immediately upon opening the cage. This is obvious from a safety standpoint. In the case of AMRs, safe operation is guaranteed by lowering their speed and the possibility of an immediate stop. If they did not have this feature, they would never have been released from cages.

Autonomy and safety, or a successful marriage of fire and water

“For a robot to be truly autonomous, you have to let it make decisions freely. In the case of self-propelled trolleys this means the freedom to manoeuvre and make decisions about the best possible route. You cannot predict what a machine will do in the next second or fraction of a second. And you do not have to know. Provided that once a person, or any other obstacle, appears, the robot registers their presence and slows down, stops, or goes around the obstacle,” says Piotr Smektała, Process Engineer w VersaBox.

An immediate stop is only possible at sufficiently low speed. However, each deceleration or stop slows down the entire system and reduces work efficiency. That is why optimising the efficiency of AMRs means achieving maximum safe traffic speed.

AMRs must follow the necessary safety regulations laid out in the PN-EN 1525 and ISO 3691-4 standards. The regulations primarily concern the speed of AMRs and the required safety systems. The specific requirements are related to the two areas the robot can operate in:

The standards also stipulate that the minimum distance from any fixed object within a facility should be 0.5 m. If the required distance cannot be maintained, the robot may drive through the area at a speed no greater than 0.3 m/s. Other noteworthy recommendations:

These are just some of the examples of safety recommendations. Adapting an AMR to abide by them is a necessity, however it does not ensure optimal performance in specific industrial conditions. 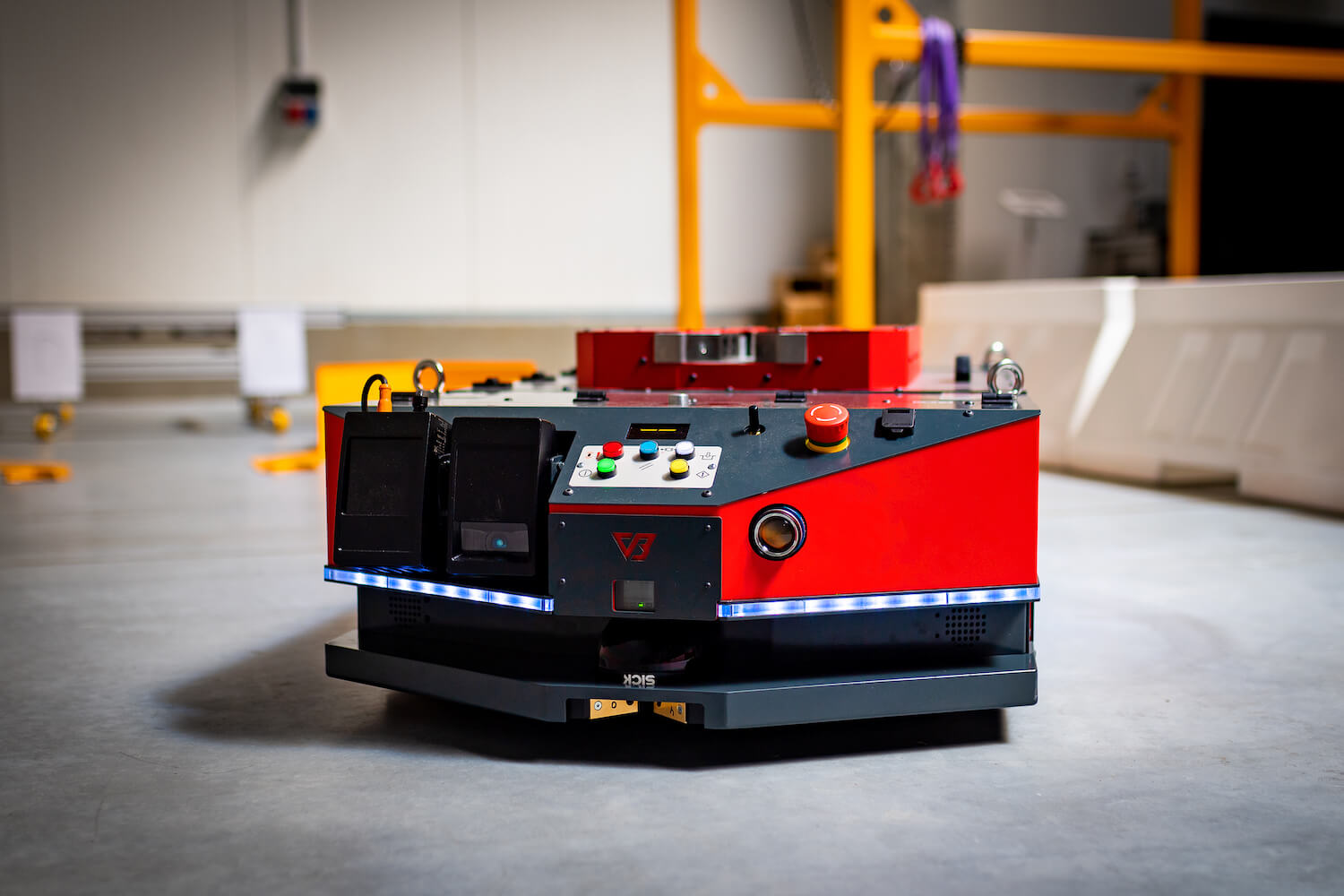 A trolley’s speed determines its performance and efficiency. It must be as high as possible while at the same time not in contradiction with the safety standards. Theoretically, all you need to do is make the robot faster. But in practice, this is a much more complex problem. Why?

“An autonomous mobile robot moves as fast as is allowed in a warehouse or factory floor. It may turn out that, in a poorly organised space with poor workplace culture, in the prevailing chaos a robot performs its tasks more slowly than a forklift operator. This is because people are able to improvise and deal with unforeseen situations much better,” – says Michał Walęcki, Chief of Engineering at VersaBox. “However, if the robot is programmed well that factory floor has been properly adapted, AMRs can achieve the efficiency of a belt conveyor. At the same time, they offer flexibility and changeover speeds unattainable to conveyors.”

Which workplace environmental factors affect the efficiency of AMRs? The nature of a workplace and the behaviour of the people working in it both determine a robot’s operation:

“We can adapt to any requirements and any space our robots can go into – says Piotr Smektała. – “The belief that a robot should cope on its own is not wrong, because our robots will cope just fine. However, best results can be achieved when the adaptation our system goes hand in hand with the adaptation of the facility itself. You must get to know the robot, understand how it works, to make the most its potential.”

“Beginnings can be difficult but also fun. The staff conduct various “experiments” – employees check how the robot behaves when they suddenly stand in its way or climb onto it while it’s moving,” – mówi Michał Walęcki. “However, they quickly get used to the presence of the machine. They soon realise that making the robot’s job difficult, by littering alleys with abandoned pallets, ultimately hurts them too. The robot is a catalyst for a process you could call self-optimisation.”

The presence of a robot forces an improvement in order, cleanliness, work organisation, and changes people’s approach to the use of shared spaces. The result is greater productivity and work safety.

Smart Factory. Implementation of VersaBox robots in the Faurecia factory

Faurecia Frames in Wałbrzych was looking for a way to improve the smoothness and efficiency of internal transport. That goal was to move from traditional material handling to intralogistics 4.0 based on Autonomous Mobile Robots (AMRs).