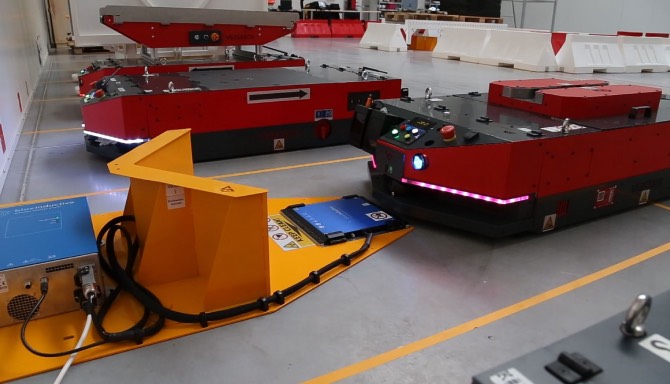 Creating efficient and flexible Autonomous Mobile Robot (AMR) power systems is a challenge faced by all manufacturers of this type of device. Regardless of which one is used, it must meet similar requirements: small traction battery size, relatively long run-time, ease and speed of charging (or battery replacement). The goal is to make the most of the robot’s capabilities, which in practice means continuous or shift operation.

By far the most desirable thing in shift operation is for the AMRs to perform assigned logistics tasks continuously for a minimum of 8 hours, i.e. one full shift. VERSABOT 500 robots have this ability, allowing them to adapt seamlessly to warehouse and production facility work schedules.

The robot takes care of the battery

Unlike other, numerous machines powered by batteries, AMRs not only monitor the battery status, but also take care of the charging themselves. After noting a drop in the traction battery charge below a certain level, the robot goes to the charging station. The connecting and charging processes are entirely automatic and do not require human intervention. After replenishing its energy reserves, the robot goes back to work exactly where it left off.

The frequency and charging time depend mainly on the kind of traction battery. Depending on the type, they may allow multiple, quick recharges or require long charging cycles, but in return offer a long run-time.

Among the batteries that could be used in AMRs, gel batteries have been used the longest. They’re an upgraded version of the lead-acid battery, in which a liquid electrolyte has been replaced with a gel (sulphuric acid mixed with silica). The density of the gel means that it’s no longer necessary to keep the battery so rigorously horizontal for fear of leakage. The second incredibly important feature of the gel is that it doesn’t evaporate, which means there’s no need for periodic refills of distilled water. Gel batteries are entirely maintenance-free power sources. Like traditional lead-acid batteries, they are highly durable and resistant to deep discharge, but they do need a relatively long charging time. Frequent but short recharges, very useful in the intensive use of AMRs, have a detrimental effect on gel batteries.

The solution to frequent recharges is the use of lithium-ion traction batteries. Unlike gel batteries, they charge very quickly (a dozen to several dozen minutes) and tolerate “installment” charging very well, meaning recharging in the time available between tasks. What’s more, lithium-ion batteries are much smaller and lighter than comparable acid batteries. They also have a longer service life (more charging cycles). They have a higher current density, which means that even at low charge they provide more power than acid batteries. The only downside to lithium-ion batteries is their sensitivity to deep discharge, which could lead to irreversible damage.

The latest and most promising power source for AMRs are so-called supercaps, or supercapacitors. They are characterised by extremely short charging times, but do not offer a current density comparable to lithium-ion batteries. A definite advantage of supercapacitors is their battery cycle count: hundreds of thousands cycles, and sometimes even over a million cycles. For comparison – gel and lead-acid batteries can withstand a maximum of several thousand cycles.

The financial aspect is also very important when choosing the type of power supply. The ratio of battery capabilities to costs makes gel batteries invariably the most popular with lithium-ion batteries increasing in popularity, while supercapacitors (by far the most expensive option) are still waiting for their big market opening.

In each individual case, the choice of power supply type (and consequently the method and frequency of charging) is usually adapted to the type of logistics process supported by the robot. It’s possible to program the robot so that it uses any technical break to charge. Supercapacitors work best with such rapid recharges. However, charging must be frequent due to the fact that a single charge is enough for only several dozen minutes. On the other hand, lithium-ion batteries usually require about 10-20% of the robot’s working time to charge. They make up for this by being able to operate for long periods of time without the need to replenish their energy storage. As a result, they require a completely different work and charging schedule. Knowing the capabilities and limitations of each solution allows for a flexible selection for each specific work environment.

The option that ensures a continuous use of the robot is a quick-change battery system – this allows to shorten the time needed to recharge by simply swapping the empty battery for a fully charged one. Gel batteries are ideal for use in a shift system (one battery in use, while the other one charges) due to their relatively low cost.

Power without a plug, or remote battery charging stations

AMRs automatically going to their charging station and connecting to the charger on their own are a great improvement. But you can go a step further and take advantage of remote charging, i.e. wireless energy transfer which uses inductive coupling. The newest models of VERSABOT 500 use this method of charging. The robot doesn’t need a physical connection to the charging station, which eliminates the need for joint maintenance, and for short circuit and electric shock protection.

It’s worth mentioning that most charging stations don’t need any special adaptations of their electrical installation. All you need is a 230-volt electrical outlet. Supercapacitors are the exception – they require robust electrical installations, preferably separate from the rest of the power grid – due to large energy transfers in very short amounts of time.